This Is What God Says

Genesis 1:27,28:
So God created man in his own image, in the image of God created he him; male and female created he them.
And God blessed them, and God said unto them, Be fruitful, and multiply, and replenish the earth, and subdue it: and have dominion over the fish of the sea, and over the fowl of the air, and over every living thing that moveth upon the earth.

Leviticus 18:22:
Thou shalt not lie with mankind, as with womankind: it is abomination.

Leviticus 20:13:
If a man also lie with mankind, as he lieth with a woman, both of them have committed an abomination: they shall surely be put to death; their blood shall be upon them.

Deuteronomy 23:17:
There shall be no whore of the daughters of Israel, nor a sodomite of the sons of Israel.

I Kings 14:24:
And there were also sodomites in the land: and they did according to all the abominations of the nations which the Lord cast out before the children of Israel.

I Kings 15:11,12:
And Asa did that which was right in the eyes of the Lord, as did David his father.
And he took away the sodomites out of the land, and removed all the idols that his fathers had made.

Proverbs 5:18,19:
Let thy fountain be blessed: and rejoice with the wife of thy youth.
Let her be as the loving hind and pleasant roe; let her breasts satisfy thee at all times; and be thou ravished always with her love.

Romans 1:18-32:
For the wrath of God is revealed from heaven against all ungodliness and unrighteousness of men, who hold the truth in unrighteousness;
Because that which may be known of God is manifest in them; for God hath shewed it unto them.
For the invisible things of him from the creation of the world are clearly seen, being understood by the things that are made, even his eternal power and Godhead; so that they are without excuse:
Because that, when they knew God, they glorified him not as God, neither were thankful; but became vain in their imaginations, and their foolish heart was darkened.
Professing themselves to be wise, they became fools,
And changed the glory of the uncorruptible God into an image made like to corruptible man, and to birds, and fourfooted beasts, and creeping things.
Wherefore God also gave them up to uncleanness through the lusts of their own hearts, to dishonour their own bodies between themselves:
Who changed the truth of God into a lie, and worshipped and served the creature more than the Creator, who is blessed for ever. Amen.
For this cause God gave them up unto vile affections: for even their women did change the natural use into that which is against nature:
And likewise also the men, leaving the natural use of the woman, burned in their lust one toward another; men with men working that which is unseemly, and receiving in themselves that recompence of their error which was meet.
And even as they did not like to retain God in their knowledge, God gave them over to a reprobate mind, to do those things which are not convenient;
Being filled with all unrighteousness, fornication, wickedness, covetousness, maliciousness; full of envy, murder, debate, deceit, malignity; whisperers,
Backbiters, haters of God, despiteful, proud, boasters, inventors of evil things, disobedient to parents,
Without understanding, covenantbreakers, without natural affection, implacable, unmerciful:
Who knowing the judgment of God, that they which commit such things are worthy of death, not only do the same, but have pleasure in them that do them.

Ephesians 5:31-33:
For this cause shall a man leave his father and mother, and shall be joined unto his wife, and they two shall be one flesh. This is a great mystery: but I speak concerning Christ and the church.
Nevertheless let every one of you in particular so love his wife even as himself; and the wife see that she reverence her husband.

I Timothy 1:8-10:
But we know that the law is good, if a man use it lawfully;
Knowing this, that the law is not made for a righteous man, but for the lawless and disobedient, for the ungodly and for sinners, for unholy and profane, for murderers of fathers and murderers of mothers, for manslayers,
For whoremongers, for them that defile themselves with mankind, for menstealers, for liars, for perjured persons, and if there be any other thing that is contrary to sound doctrine. 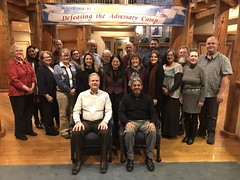 This Is What
God Says:

Unity / One Accord / Like-minded

Are the Dead Alive Now?

Freedom
(Free to Live, Free to Give)

The Great Mystery Revealed—
The One Body of Christ

Forgiveness and
Remission of Sins

Jesus Christ Is Not God

The Love of God

Church in the Home

We Have the Ministry of Reconciliation

Bearing Burdens by Speaking in Tongues