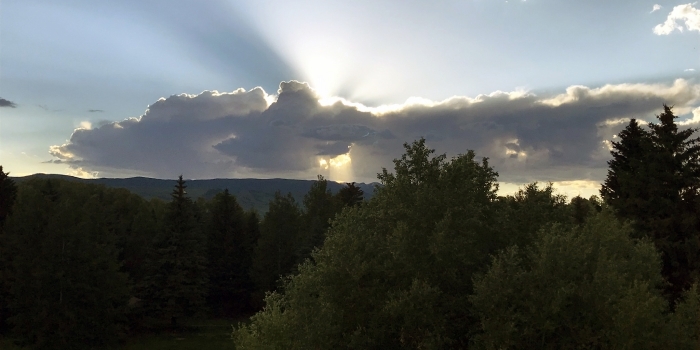 This summer, Camp Gunnison—The Way Household Ranch hosted one camp and three getaways for believers and their guests to enjoy. The Adventures in Songwriting Youth Camp was from July 2 to 6, 2019, and the getaways were in July, August, and September. The camp and getaways were filled with fun and fellowship and served as a unique destination for summer travelers. 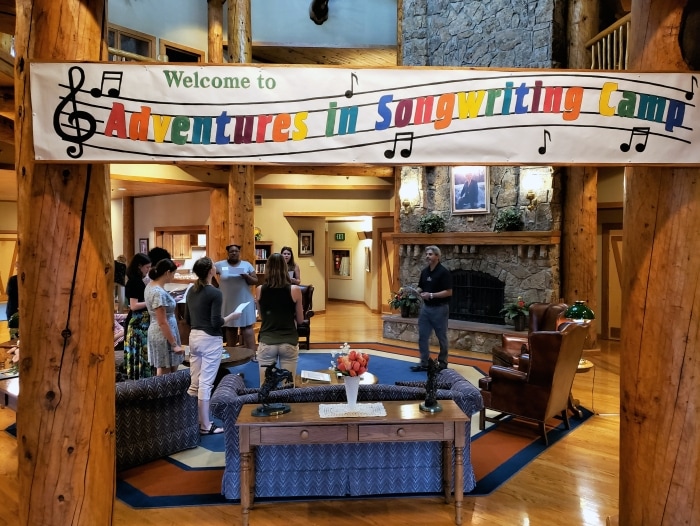 The Adventures in Songwriting Youth Camp was held for young people between the ages of eighteen and twenty-five who aspire to bless God’s people with the Word in music. They arrived at The Household Commons where they were able to meet fellow campers, Camp Gunnison Staff, and their teacher for the camp. After the opening supper, campers received an orientation of the camp and concluded the evening with a “get-to-know-you” activity where they were able to learn more about each other. 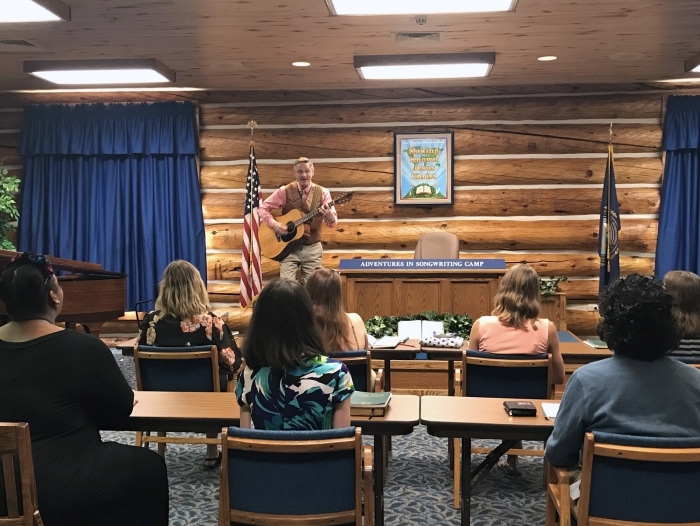 Their teacher was Mr. Mike Martin, a Way Corps minister who has served in Way Productions for over twenty-five years. He had much to share regarding what God’s Word says about music and songwriting, as well as practical tips on how to write songs. The campers were then grouped into pairs, and each pair began working together to develop a song that would bless God’s people. 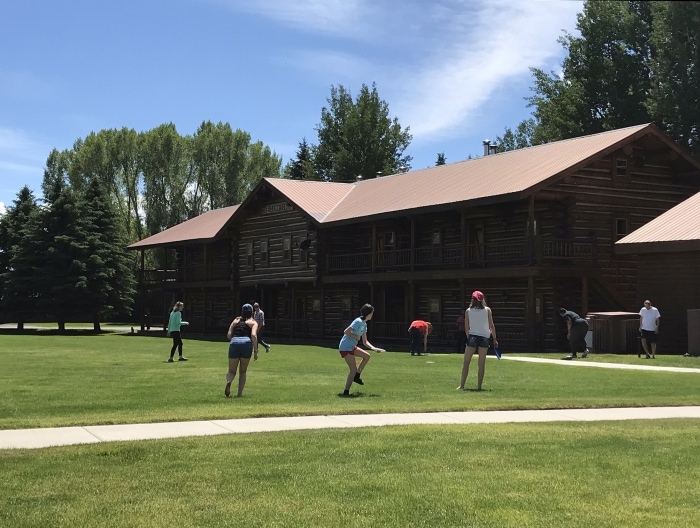 There were other fun activities for the campers to enjoy outside of the classroom. One of these was a lively game of disk golf on the Mall.

July 4, which marks Independence Day in the United States, occurred during the camp. There were festivities for the occasion, including a ceremonious flag raising and a picnic-style noon meal at the Ermal L. Owens Pavilion. During the meal, the campers enjoyed hearing an audio portrayal of a historical patriotic speech, and also a patriotic song performed by Mike Martin. 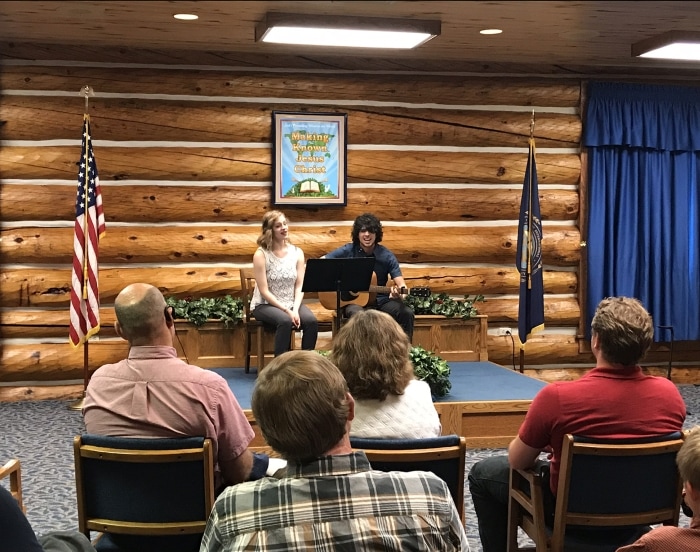 The culmination of the youth camp was a talent-filled showcase that the campers presented to the Camp Gunnison Staff. Each musical pair performed the song they wrote during the camp, and every song showcased their believing, enthusiasm, and love for God and His Word. At the end, the Staff gave the campers a standing ovation. 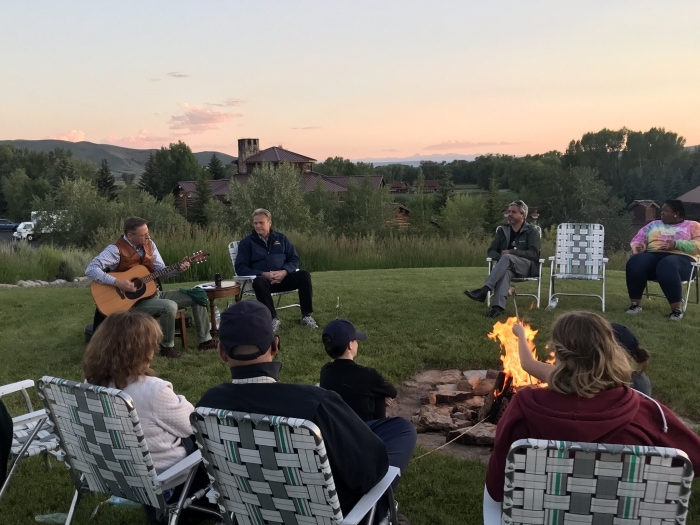 After the showcase, the campers had an opportunity to share their hearts around a campfire at a closing fellowship with the Camp Gunnison Executive Committee, their wives, and Mike Martin. 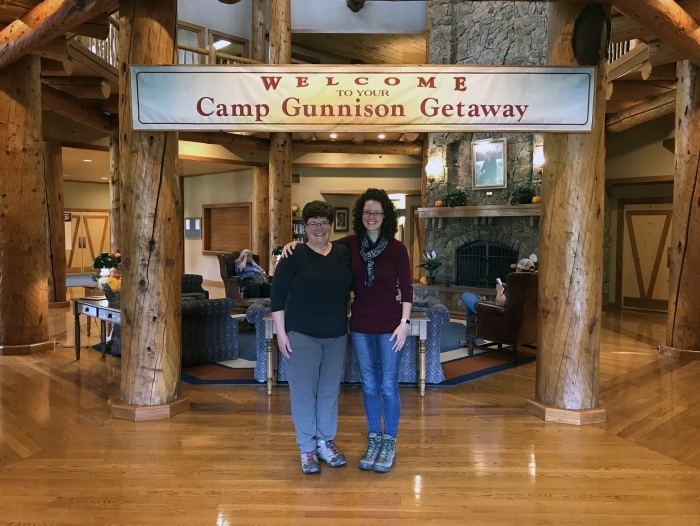 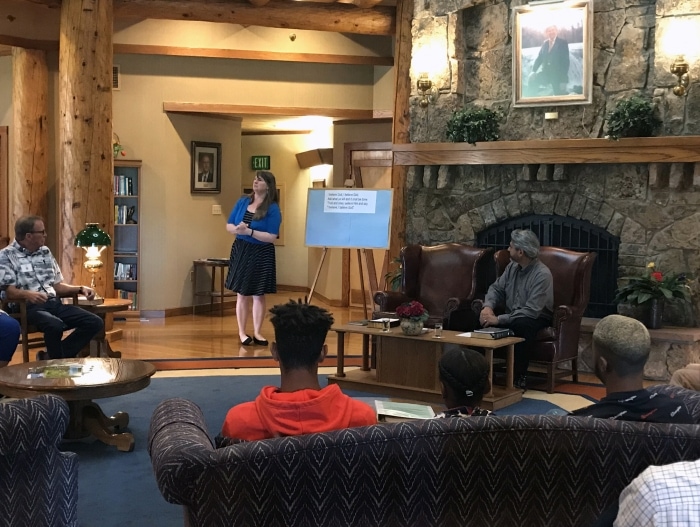 Guests had the option to begin their getaway in God’s Word with a 10:30 a.m. fellowship on Sunday, taught and led by Camp Gunnison Staff.

Following the fellowship, the guests and Staff listened to the Sunday Teaching Service live via a phone hookup in The Household Commons Auditorium. From Monday through Friday, many guests ate the noon meals with the Staff and enjoyed various historical, informational, and entertaining presentations. 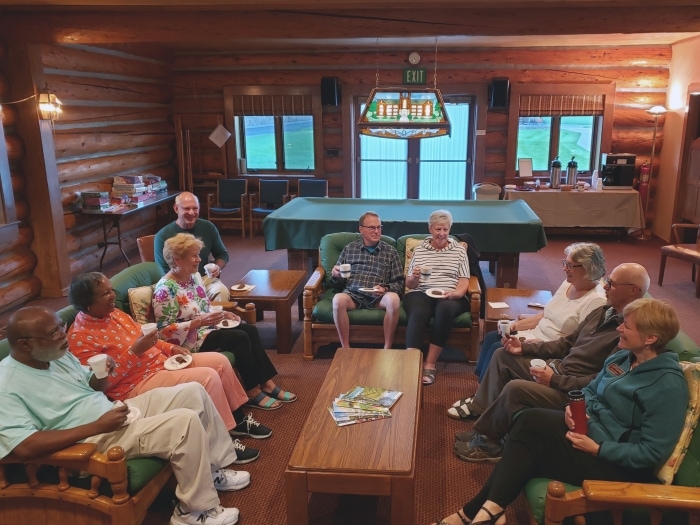 Each morning during the getaway, it was available for guests to go to The Inn to enjoy complimentary coffee, tea, delicious “Camp Gunnison bars,” and fellowship with each other. This was often a time for people to get to know each other, talk about God’s Word, and even share ideas of things to do during the getaway. 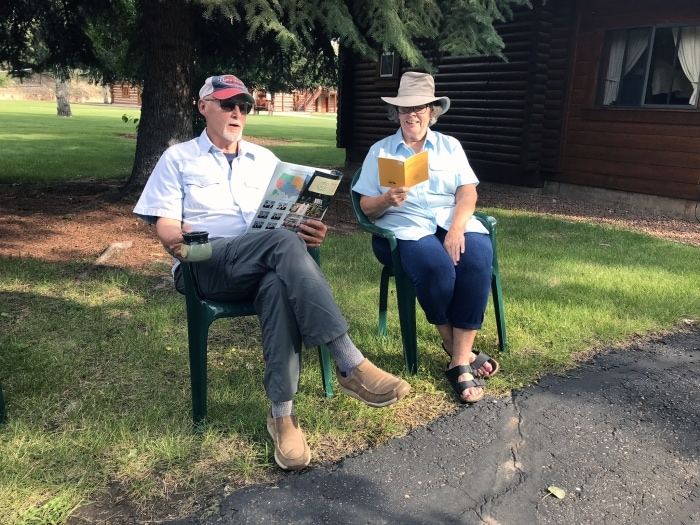 When guests were not participating in getaway events or visiting the local area, they enjoyed various activities in their free time such as fishing, volleyball, or even simply getting refreshed by some time outdoors. 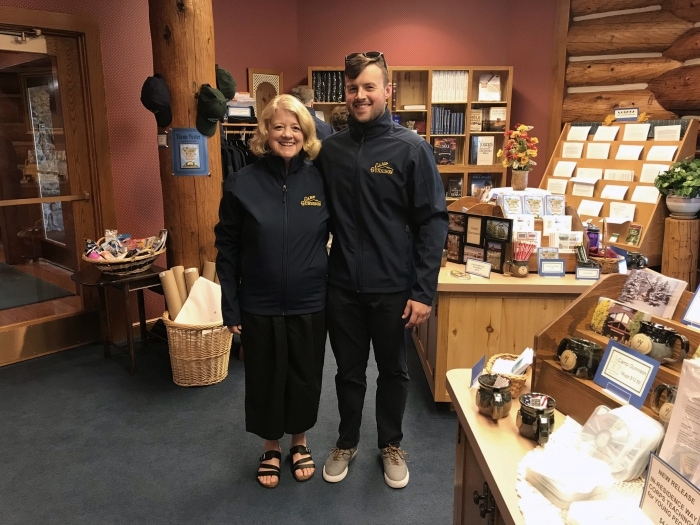 The Camp Gunnison bookstore was available throughout the getaway to purchase ministry resources, Biblical research materials, and items exclusive to Camp Gunnison.

Raft rides gave people an opportunity to float down the Gunnison River while also taking in God’s beautiful handiwork outdoors.

Guests could also participate in a scenic hayride tour around the Camp Gunnison grounds, learning more of the camp’s history. 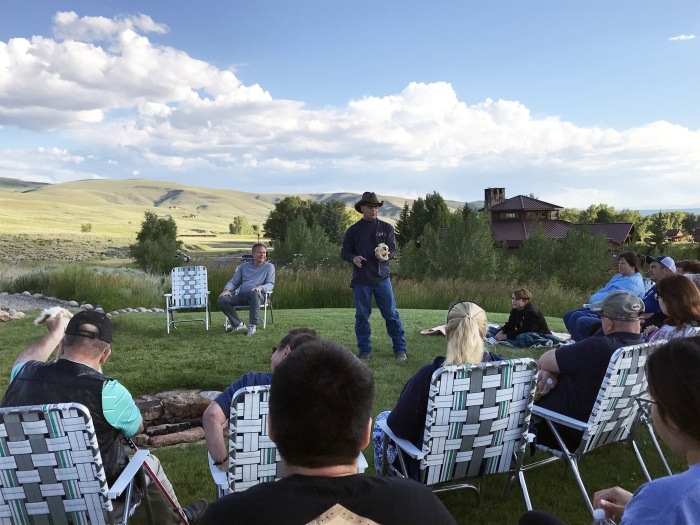 During the July getaway, a member of Colorado Parks and Wildlife gave a special presentation on wildlife found in the local area. 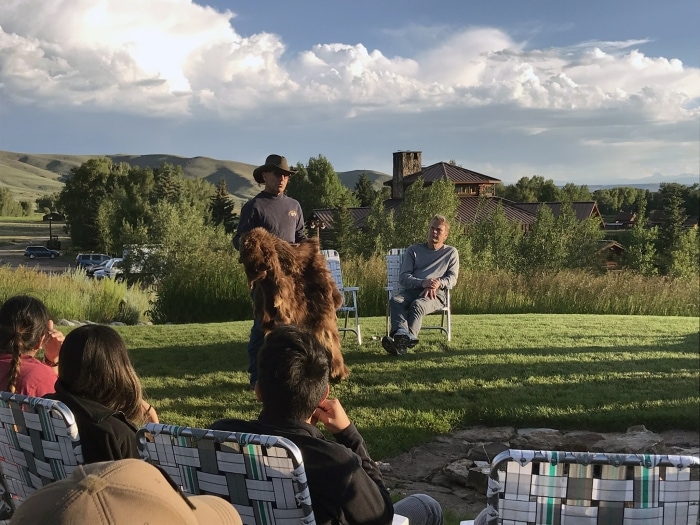 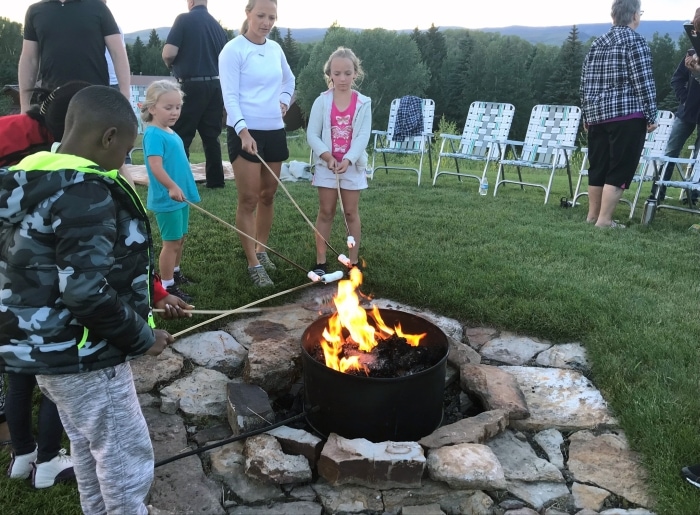 Afterwards, there was sweet fellowship while making s’mores around the campfire. 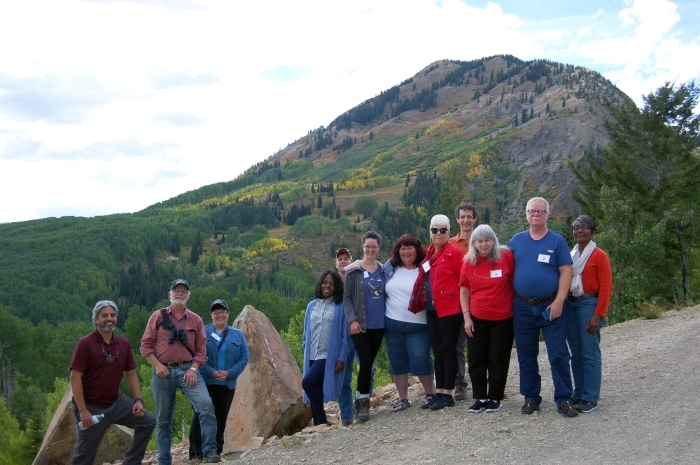 During the September getaway, guests participated in scenic driving tours, taking in the natural beauty of the local area. From elevated vistas around the Gunnison and Crested Butte areas, they admired the colors that come with the transition from late summer to early fall. 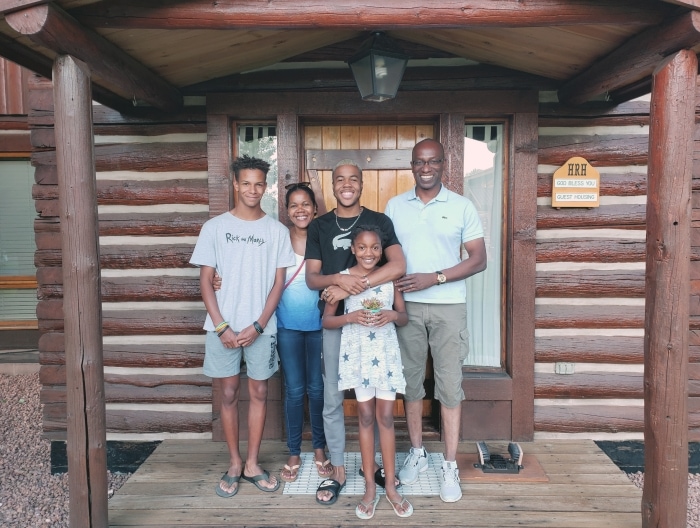 This summer at Camp Gunnison was filled with refreshing and memorable experiences to bless God’s people.

Check out our Camp Gunnison page to see more information regarding the upcoming activities and events in 2019–2020 so you can plan your visit to spend quality time in the high country.